Local Information following the death of Her Majesty The Queen

Find out how we've marked the passing of Her Majesty The Queen and how you can pay respects.

Following the death of Her Majesty Queen Elizabeth II on Thursday 8 September, the Council has been paying its respects.

Provost Mary Montague issued a statement and sent a letter of condolence to King Charles III expressing her sadness at the death of The Queen.

On Friday 9 September a Union flag was flown at half-mast outside the Council's Eastwood HQ building.

Books of condolence have  been set up at both our Eastwood and Barrhead offices. Provost Mary Montague was first to sign, and they were then made available for members of the public to add their messages of condolence. 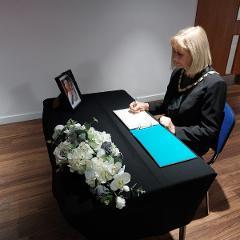 The books remain open to the public (Monday-Saturday, 9am-5pm) until Tuesday 20 September at 4.45pm.

A grassed area outside Eastwood HQ has also been set aside for floral tributes to be laid.

On Saturday 10 September, The Union flag, was raised to full mast to mark the Principal Proclamation of The King, which took place at St James's Palace in London. The flag was returned to half-mast on Sunday 11 September and will remain so until after the Queen's funeral on Monday 19 September.

Sean Murphy, temporary Sheriff Principal of North Strathclyde, delivered the Proclamation, with the ceremony attended by Colonel Peter McCarthy, Lord-Lieutenant of Renfrewshire, and the Provosts of Renfrewshire, East Renfrewshire and Inverclyde. 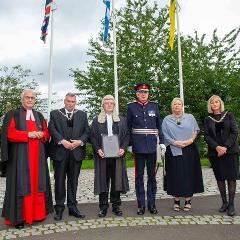 On the afternoon of Monday 12 September, a Procession was formed on the forecourt of the Palace of Holyroodhouse to take the Queen's coffin to St Giles' Cathedral, Edinburgh.

The King and Members of the Royal Family led the Procession and attended a Service in St Giles' Cathedral to receive the Coffin. Provost Mary Montague attended this service to represent East Renfrewshire.

A Service of Thanksgiving for the life of Her Majesty the Queen is being held at Paisley Abbey on Saturday 1 October at 11am (doors open 10.15am).

The event is being hosted jointly by East Renfrewshire, Renfrewshire and Inverclyde Councils and the Lord Lieutenant of Renfrewshire.

A limited number of tickets are available for members of the public to apply for. Tickets are free.