We're on track to complete 128 roads resurfacing projects, as part of a £15million budget commitment. 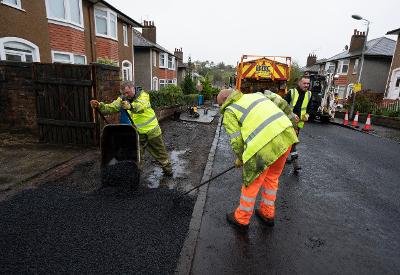 A five-year programme was set up in the 2019/20 budget to top up the existing annual roads resurfacing works for the next five years, to specifically target upgrading residential roads.

This programme, which will see improvements completed to 96 roads and 32 pavements across East Renfrewshire by the end of March 2022, is carried out over and above the existing annual roads resurfacing works and is approved by the Council each year.

Councillor Tony Buchanan, Leader of East Renfrewshire Council, said: 'I'm delighted that improvements to 128 roads and pavements across the authority are due to be completed over the coming months. This significant investment, which was approved by the Council in 2019, has already made a huge difference to all of our road users - pedestrians, drivers, cyclists and those using public transport. The quality of our roads is a key issue for residents across the area, so we're absolutely committed in continuing to improve our roads and pavements to ensure local people and our visitors can travel in and around East Renfrewshire safely. Plans for the final two years of the project will be put forward in due course, and will be fundamental in continuing to transform roads in East Renfrewshire'.

All of East Renfrewshire's roads are assessed and reported on nationally on an annual basis. East Renfrewshire is currently ranked second in Scotland for the condition of its A class roads, which are classed as the most important routes for residents and visitors. The area's B and C class roads are better than the Scottish average for both categories.

Our A and B class road network is classed as in a relatively good condition, so the majority of the additional allocation is directed towards residential roads.

A number of factors are taken into consideration to prioritise which roads will benefit from the programme each year. This includes the structural condition of the road or pavement, usage, maintenance costs for previous years, public feedback and geographic spread.

In addition to resurfacing works, the additional budget has also funded the upgrade or replacement of 18 sets of traffic signals and pedestrian crossings, with £200,000 per year also being spent on upgrading street lighting infrastructure throughout the area.

Road improvements have recently been carried out at Richmond Avenue in Clarkston, including road and pavement resurfacing to improve the overall quality of this road for local residents and road users.

Other roads and pavements which have been resurfaced in the additional works since it began in 2019, cover a wide area across the whole authority including: Robertson Street in Barrhead, Glenwood Drive in Thornliebank, Harelaw Avenue in Neilston, Greenwood Road in Clarkston and Broomvale Drive in Newton Mearns.