A flag was raised to mark Armed Forces Day which will be held on Saturday 26 June. 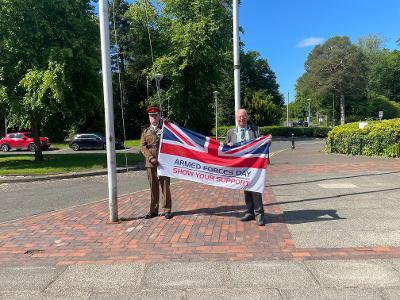 A flag raising ceremony is usually held at the Council Headquarters to give local people the opportunity to show their support for the men and women who make up the Armed Forces community - from serving soldiers to service families and from veterans to cadets.

Although a flag raising ceremony was unable to be held again this year due to Coronavirus restrictions, Provost Jim Fletcher, WO1 (RSM) Nigel Saul and Sergeant Mhango, Royal Lancers today raised the Armed Forces Day flag at the Council Headquarters in Giffnock to commemorate the occasion. The flag will fly for a week to honour the contribution of our Armed Forces.

The Council will also share a virtual celebration on its Facebook and Twitter social media channels on Saturday 26 June. This online event was created with Renfrewshire and Inverclyde Councils to commemorate the occasion, and features contributions from the Provosts of East Renfrewshire, Inverclyde and Renfrewshire, Colonel Peter McCarthy, Lord-Lieutenant of Renfrewshire, Cadets and a representative from the 71 Engineering Regiment.

Provost Jim Fletcher said: 'Armed Forces Day is always an important date in my diary. It's a chance to pay tribute and thank each and every one of our service personnel for their continued bravery and efforts. Like last year we are unable to mark Armed Forces Day in our usual manner, but this does not mean that Armed Forces Day 2021 is any less important and I hope you are able to take the time to show your support virtually and help mark this prestigious event.'

Colonel Peter McCarthy, Lord-Lieutenant of Renfrewshire said: 'Armed Forces Day has become an important day in the national calendar and I am delighted that the flag is being raised in East Renfrewshire to recognise the outstanding contribution that our Armed Forces family make and have made to supporting and sustaining the lifeblood of our country.'

'East Renfrewshire Council has signed a Community Covenant with the Armed Forces and Voluntary Action East Renfrewshire which is a voluntary statement of mutual support that recognises the sacrifices made by members of the community, including those currently serving as well as their families.

'The service willingly given by the veterans to the Nation at home and abroad and in the national and local community as willing hard working employers, employees, entrepreneurs and volunteers greatly contributes to many aspects of daily life that should be recognised and supported.

'As the community comes out of Covid-19 restrictions they are a valuable resource to employers as trained adaptable employees as they integrate into the community with their families.'

Monty Cowen, Association of Jewish Ex-Servicemen and Women (AJEX) said: 'It is very important to support and remember the work of the Armed Forces on Armed Forces Day, who work to look after everyone, especially given that Covid-19 has prevented this event being recognised in the usual manner.'