Read about the financial challenges facing the Council over the next 3 years. 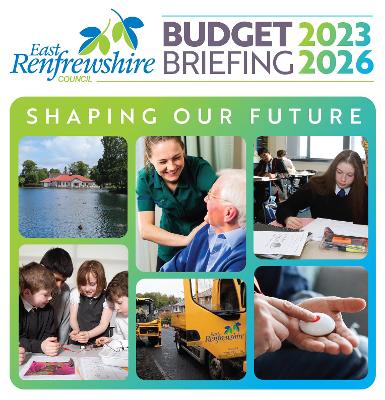 Council Leader Owen O'Donnell has issued a stark warning to residents after revealing a £30m budget black hole is being faced over the next three years.

And the bleak outlook is made even more challenging because, with the Council having already made savings of more than £80m since 2015-16, it has become increasingly difficult to find more savings.

In launching the Council's ' Budget Briefing 2023-2026: Shaping our Future' proposals (PDF) [1MB] , as part of the first phase of public engagement on future spending plans, Councillor O'Donnell was upfront with residents about the challenges ahead.

He said the prospect of no extra money in real terms from the Scottish Government - the single biggest source of funding for all councils - over the next three years and inflation running at 10% had combined to create East Renfrewshire's £30m budget black hole.

Council Leader Owen O'Donnell said: 'We already know that the budget process over the next three years is going to be extremely challenging and will require some very difficult decisions to be made. I am in no doubt that the major reason for this is the long-term structural underfunding of local authorities. To be clear, these are decisions we do not want to have to make but we are legally obliged to deliver a balanced budget. A radical approach to funding will be required, so it's important residents consider this Budget Briefing before the engagement process, which will start in the next few weeks. The Council has already made savings of more than £80m since 2015-16, so to bridge a gap of a further £30m is going to be very difficult. It is already expected that it will leave us with no option but to consider cutting services and jobs and increasing charges, including council tax. Once the public engagement process is completed, we will listen to the views put forward before setting the Council's Budget on 1 March next year.'

Residents are being encouraged to read the Budget Briefing (PDF) [1MB]  which sets out the unprecedented funding challenges faced by the Council over the next three years.

The briefing provides details on where the Council's funding comes from, what it spends money on, the cost pressures being faced and the restrictions on which services it can support. It is intended to provide residents with an overview of the important information which needs to be considered when designing services for the future.

In the second phase of the Council's budget engagement residents had the opportunity to provide feedback on which services are most important to them. Residents also had the chance to put themselves in the shoes of the Council in trying to decide what services should be cut to make the required savings target.

The 'Budget Briefing 2023-2026: Shaping our Future' document highlights that the Council is facing the same challenges as everyone else in terms of inflation and rising energy costs and pay awards. In East Renfrewshire, we also have a growing population which needs to be supported with council services. However, Government grants, which make up the bulk of the Council's funding, are expected to be at a flat cash level.

In meeting the budget challenges each year, the Council is emphasising there are a number of restrictions on the £300m it spends. Most of the Council's funding comes directly from the Scottish Government, with just 18% raised from what residents pay in Council Tax. A significant amount of the Council's grant funding from the Scottish Government is ring-fenced for national initiatives and policy priorities, such as education and social care. This leaves limited scope to change how the budget is spent.

Around £25m of the £80m worth of savings which have been made since 2015-16 have been delivered via a wide-ranging efficiency drive. This has included an ongoing digital transformation programme providing more online services to customers and introducing a number of new internal systems which have streamlined processes.

The Council has also made extensive use of its financial reserves - committing to using £5.2m from reserves in the current financial year instead of having to make more painful cuts to frontline services. Using reserves to avoid such cuts means there will be fewer reserves to use in the future.

Despite the tough financial climate and difficult savings which are needed, the Council remains committed to significant capital investment in the services which are most important to local people.